How do we interpret the “60 minute” rule?

Six years ago, I wrote an article for the ORBCON newsletter entitled “How do we interpret the 30 minute rule?” The article referred to the CSA Z902-10 standard 10.10.5 (c) that states that “a blood component that has been returned to the transfusion service shall not be re-released unless a suitable temperature monitoring system indicates that the blood or the blood component has not reached an unacceptable temperature since being released or, in the absence of a temperature-monitoring system, that the blood component has not been outside of a controlled environment for more than 30 minutes (measured by occurrence, not cumulatively).” At that point, we reported on a survey of 110 Ontario hospitals (73% response rate) which showed variable interpretations of the CSA clause: 45% discarded RBC units based on time (30 minutes) alone; 13% discarded RBC units based on temperature (10oC) alone; 25% required that both time and temperature criteria were met; 13% discarded RBC units regardless of temperature or time spent outside of the blood bank. In 2009, 33 Ontario hospitals reported that they had discarded 457 RBC units for not meeting this standard.

So how do we apply this into our blood bank inventory practice? The CSA Z902-15 standard in fact does not specify that the temperature needs to be taken when a RBC unit is returned to the blood bank. Many blood banks have interpreted this clause as: if the RBC unit is returned to the blood bank from a clinical area within 60 minutes, it can be returned to inventory. A few institutions continue to measure the temperature of RBC units on return and some are mandated to if they are AABB accredited institutions. At our centre, we have instituted the following: For RBC units returned from a clinical area to the blood bank within 60 minutes, the temperature should not exceed 14oC. This reflects the data that was conducted in Canada by Ramirez-Arcos and de Grandmont1-3. The Canadian AABB-accredited institutions have also been granted a variance from the AABB standard 5.26 by the AABB Standards Program Committee.

Of course, the best case scenario is to avoid having RBC units returned from the ward. So as I finished off my article 6 years ago, I leave you with the same advice: we need to prevent returns of issued RBC units by making sure the patient is ready for and aware of the transfusion with the correct transfusion order, a properly completed consent and a patent intravenous line before the blood arrives on the ward. Happy SOP changing!

Editor’s note
Blood products such as albumin, IVIG, RHIG etc. may also be returned into usable inventory, provided that the product has not been outside of a controlled environment for more than the time recommended by the manufacturer.

Quality Indicators in the Ontario Transfusion Quality Improvement Plan: How Are You Doing?

The Ontario Transfusion Quality Improvement Plan (“the OTQIP”) was introduced in April, 2016. The toolkit which accompanies the OTQIP includes a guidance document, a quality improvement plan narrative, recommendations for the use of blood components in adult inpatients, template order sets for adult inpatients, a template standard operating procedure for red cell order screening by blood bank technologists, an educational presentation about red cell order screening (including case studies), and a tracker tool to track audit results over time. The two quality indicators in the OTQIP are 1) percentage of red cell orders with a pre-transfusion hemoglobin less than 80 g/L and 2) the percentage of red cell transfusions which are single unit (one unit at a time) transfusions. The target goal for each of these indicators is 80%, based on the results of the 2013 ORBCoN Red Cell audit. For more details, including suggestions for how to do a simple audit, go to the ORBCoN website www.transfusionontario.org and click on the Quality Improvement tab.

As I travel around the province doing educational presentations about blood transfusion, I am asking hospitals if they are willing to share the data they have collected for the two indicators above. This a bit unscientific because hospitals may be auditing slightly different patient populations, but it may be helpful in these early days of implementing the OTQIP to show hospitals how they are doing compared to others. All data is presented without naming hospitals. The information has been of great interest to the audiences, some of whom may not be very familiar with the OTQIP or their own data. Here is what I have collected so far: 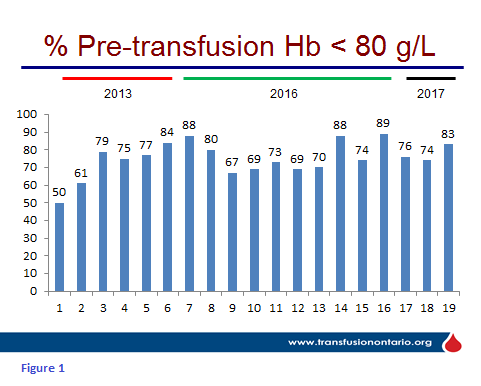 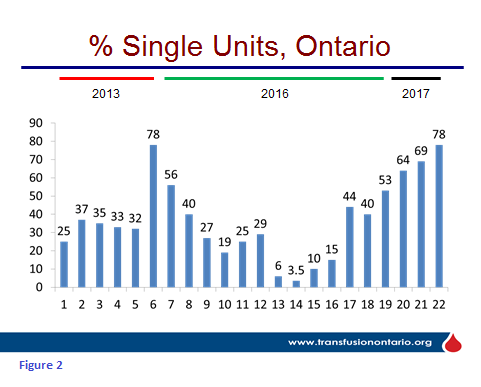 Notes to the graphs: The 2013 data in both graphs are from the 2013 ORBCoN Red Cell audit. Two hospitals are shown more than once in each graph because they have done multiple audits over time. Hospitals have data on one or the other indicator, or both. All are community hospitals except for two.

All hospitals are encouraged to consider adapting the OTQIP to their own use, and/or to submit indicator data to ORBCoN using the tracker tool in the OTQIP toolkit. Then, we’ll have more robust data to show you and will be able to track overall provincial performance over time. The OTQIP could also be used to improve performance in the transfusion of other blood components, such as plasma.

ORBCoN strives to improve patient safety and standardize best practices in Transfusion Medicine by continuing to support the availability of educational resources to our Ontario stakeholders. The following new or revised resources are now available through transfusionontario.org.

An electronic tool has been developed in order to capture RBC quality improvement (QI) metrics. The QI metrics include the percentage of pre-transfusion hemoglobin <80 g/L and the percentage of single unit transfusions. This tool is available in the ORBCoN e-tools application.

New to e-tools?
Contact your regional office to set up a site administrator.

Do you have a Transfusion Medicine quality improvement initiative or utilization improvement activity from your hospital that you would like featured in the ORBCoN Report? We want to hear from you, contact us at transfusionontario.org or contact your regional office.

COVID-19 Information and Tools for Blood Management.Find them here